Your cart is empty
Go to shop!
Product is not available in this quantity.
Contact
Aaptiv

Removing friction and allowing users to have the choice to engage with recommended starter workouts as a jumping off point or browse the app on their own.

One of the first projects I worked on upon joining Aaptiv was finding a new solution to the existing "Walled Garden'' experience, which consisted of preventing first time users from exploring the app before completing a recommended first workout. The idea behind this UX was that class completion rates were higher with the Walled Garden implemented. The issue I immediately saw with this experience was that it was forcing paid users to jump over a hurdle that they may have not been interested in jumping over. Not allowing users to skip or bypass the recommended first workout created friction, user frustration, reduced trust, and created negative feelings toward the brand. It is human nature to become frustrated when unable to make a choice for oneself. As a result of poor user feedback and a negative onboarding experience for first time users, we set out to find an improved solution to the Walled Garden.

Paying users are blocked from exploring the app they just signed up for until they complete their first recommended workout (walled garden). This experience improves first class completion rates, but the data is skewed because users do not have a choice and therefore must complete the workout to move forward and explore the app. We've received large amounts of negative feedback from users that this experience is confusing, shady, and diminishes trust in Aaptiv.

By removing the Walled Garden and allowing users to choose their experience upon signing up with Aaptiv while still providing a jumping-off point, we believe user satisfaction will dramatically increase, class completion rates will improve, and subscription renewal turn-off rates will reduce.

The goal was to A/B test removing the walled garden in an effort to prove that the existing experience would perform worse than a solution that guides users into the Aaptiv experience and makes recommendations with where to begin, but doesn't force users to take a class. We aimed to improve class completion rates, subscription renewals, and the overall first time user experience.

We spent time looking at historical data - including conversion rates from sign up, and after completing onboarding, and gathering qualitative feedback from users. The data showed low conversion rates and high drop-off rates, which correlated directly to the Walled Garden screens. From here, we could better understand our users. They want the freedom of choice when paying for an app. They do not want to be forced to perform an action.

The project scope consisted of testing variations to encourage users to take their first workout based on their fitness goals assessed during on-boarding. We want to still provide starter workout recommendations because historical data shows that users who complete their first workout are more likely to build a successful fitness habit and will return to take another workout more likely than those who do not take their first workout upon signing up. Constraints involved having to figure out a way to surface these recommendations across the Coach and Browse tabs without structurally deconstructing the current experience. Solutions should emphasize a starting point while still allowing users to see what’s beneath the recommendations within the viewport prior to scrolling.

After spending time digesting qualitative and qualitative data, I began to iterate on what the user journey should be to improve the first-time user experience. After review and testing, I moved on to multiple rounds of wire-fames, where we could rapidly understand how the in-app experience would change, what the technical requirements would be, and how we should narrow the scope of the project. Upon figuring out the user journey, I worked on quick mocks and prototypes to get a more clear sense of the different solutions we were narrowing down for A/B tests.

Please click on each image to zoom in a new tab.

The Walled Garden Removal experiment was highly successful. We tested multiple variations which included visual differences in displaying the recommended starter workouts on both the Coach and Browse tabs, and testing with just removing the existing Walled Garden experience without making additional changes. Ultimately, we found that by removing the Walled Garden we were able to increase first class completion rates to 8%, increase subscription renewal rates, lower on-boarding drop-off, reduce friction, and allowed users the ability to choose how they explore the app. We learned that although there wasn't a significant change in conversion rates and other metrics, the usability and reduced friction provided a more enjoyable user experience. Sometimes the qualitative data must take priority above the slightly lower class start and class finish rates, because those numbers are essentially skewed when the result from a forced experience. 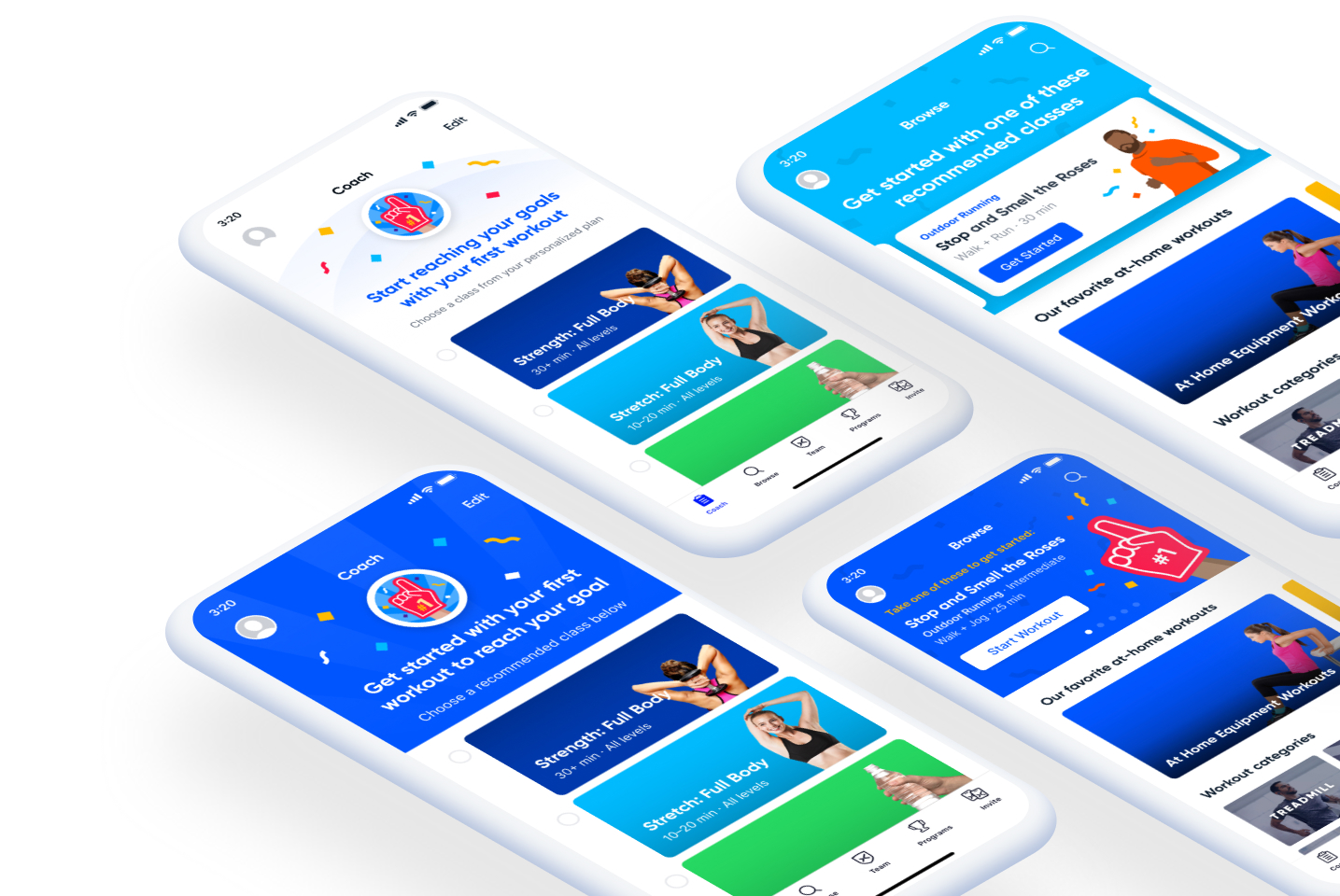 back to all projects